So it is a well known fact amongst my family and friends that I am not at all good with children. And when I say children, I mean anything from  a new born to like… 30. My brother Simon has 5 children, and my brother Bevan, has 2. 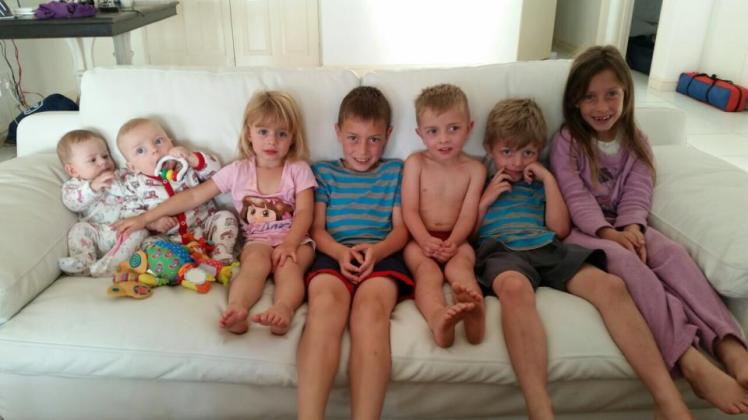 From left to right (yes, it matters) we have Jorja, Hunter, Kady, Cullen, Tyler, James and Zoey. I also have friends who have kids.

Left to right: Monique, Declan, Cadence and Liam.
Then there is my cousin Lisa’s children. A gang of 5 boys.

My neighbors have kids too. Both sides. One side is a family who I am considering blowing up. I think there is one kid, but he screams so loud so often that I think there may be eleven of them. On the other side, are two much better behaves kids who ‘think’ I am cool – mainly because when I met them I gave them fist bumps. Not to be cool…  I just have brothers and that’s what we do.

But that ‘cool’ went out of the window when I (seriously) explained to the one kid who farts are actually mini pooh particles that float about so when you fart in company you are basically taking mini shits on people. He was smiling until his mother looked like she wanted to hit me. Again, I grew up with boys. These are the kinds of conversations you have around the dinner table…

When at a family gathering, I am inevitably handed a baby to hold. 3 seconds later the baby is screaming like I have poked it in the eye and I hand it back. You would think they have learned by now. Do not leave a small thing in the care of Sam.

My brother begged me to baby sit one day and I interrogated him about it all. Will they be clean. Will they sleep when I tell them to. Will they cry. Will they behave like terrorists…

What I SHOULD have asked was: What do I do when one of them has climbed up to where the knives are and is wielding a Victorinox steak knife, while the older two yell at each other because one wants to watch Transformers and the other wants to watch Cinderella. The remaining hooligan in the mean time has found my iPad and was slamming into the floor because the password he was using wasn’t working. Also…  ALL this… while covered in ketchup because mom and dad thought it appropriate to buy the kids McDonald’s before dropping them off at OCD auntie Sam’s house where her pristine suede couches and super clean carpets and floors could OBVIOUSLY do with some trampled food and a few weird fingerprints all through out the house.

Oh… and flushing a whole roll of toilet paper down the toilet should be considered a scout skill or something – because I have NEVER seen that done before…  not like that.

I also don’t speak whatever gibberish children speak. So when a red faced or over excited child comes to me wanting something, it all goes very pear shaped because unless there is a kid translator, I have no idea whats going on.

It all sounds like weird vowel sounds with the occasional snot covered consonant.

Now, all the kids in the above photos… I LOVE them. Don’t get me wrong. They may be the only children on this planet that I would endure four hours of baby sitting for. The five boys in the last photo, Joey, Reuben, Corbin, Ethan and Daniel – are awesomeness packed into little bodies. They all look at me like I am crazy until I DO something crazy and then we are all best of friends, barring the communication barrier.

I dropped Zoey on her head when she was a baby, Like slam dunked her face into a table. I remind people of that when they try to hand me a baby. She was in that weird phase when they all soft and mushy and then they straighten out like a plank and unless you are holding them right, well…  accidents happen. What was more awkward was that I laughed. It was funny…

But all family outings are now at places where there is a play area.  Something makes me feel weird about having to walk past three mini toilets to go to a grown up one. Also…  kids aren’t known for their hygiene so touching anything is like a serious…  task.

And there is ALWAYS that kid who goes to the bathroom on its own and cant get its pants up or reach the soap..   and I am always too scared to pick the kid up in case a parent comes in and thinks I am being dodgy.

The first time I baby sat one of the kids called me from the bathroom so that I could help him wipe his butt. I was traumatized. That was NOT part of the deal…

Anyway. I thought I would share. Seeing as the pooh particle discussion was in the last 24 hours and just confirmed for me that if I ever did have kids I would be a horrible parent. Not only from an over clean point of view, but if anyone bullied my kids, I would smack the offending child (yes, I would) and then go find the parents.

My kids would cuss, and all be able to use weapons of all kinds before the age of 8. I would encourage them to hit back – and be specific about where exactly to ensure that the other kid goes down. And then teach them what to say verbatim to any authority that came to intervene. “If you have an issue with the principle of self defense, and are an advocate of bullying then you should contact my mother. I also recommend you don’t touch me in any way – or again, you will have to deal with my mother.”

Kids. Its hard to believe I was one once.

Mocking Bird Down
boy with a hat

writing as a way of life

handofus
Poems from a fractured mind

My ramblings poems and musings enjoy or not no pressure

The varied thoughts of a millennial modern linguist.

Confessions Of A Poet

All that is me!

I write because I must

I Kill My Own Spiders

character limited descriptions kind of give me anxiety

A few new poems every week. Haikus on Sundays.